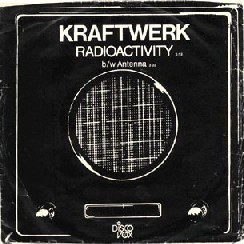 “Kraftwerk are seen as ‘electro-pop’ pioneers at their beginning, The band was inspired by the avant-garde compositions of Karlheinz Stockhausen. Hütter has also listed The Beach Boys as a major influence. Kraftwerk’s lyrics deal with post-war European urban life and technology—travelling by car on the Autobahn, travelling by train, using home computers, and the like. Usually, the lyrics are very minimal but reveal both an innocent celebration of, and a knowing caution about, the modern world, as well as playing an integral role in the rhythmic structure of the songs. Many of Kraftwerk’s songs express the paradoxical nature of modern urban life—a strong sense of alienation existing side-by-side with a celebration of the joys of modern technology. All of Kraftwerk’s albums from Radio-Activity onwards have been released in separate versions: one with German vocals for sale in Germany, Switzerland and Austria and one with English vocals for the rest of the world, with occasional variations in other languages when conceptually appropriate. Live performance has always played an important part in Kraftwerk’s activities. Also, despite its live shows generally being based around formal songs and compositions, live improvisation often plays a noticeable role in its performances. This trait can be traced back to the group’s roots in the first experimental krautrock scene of the late 1960s, but, significantly, it has continued to be a part of its playing even as it makes ever greater use of digital and computer-controlled sequencing in its performances. Some of the band’s familiar compositions have been observed to have developed from live improvisations at its concerts or sound-checks.”                                           WIKIPEDIA

Read more about them here and on their official website